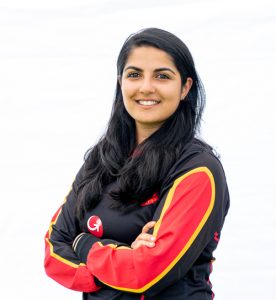 A true allrounder in every sense of the word, Sharu is a top order batter, a right-arm medium pace bowler and a wicket keeper. While she rarely keeps for the Golden Eagles, Sharu’s first claim to fame was with the gloves when she became the first female cricketer to play in the Dream11 European Cricket Series.

Sharu is one of only six players to pass 100 runs in T20 Internationals for Germany, and had the second highest aggregate for Germany in the recent Kwibuka tournament in Rwanda, just behind Tina Gough. Her highest score is 25, against Austria at the SCG in August 2020. With the ball, Sharu has 10 wickets at 20.10 with the excellent economy of 4.41. Best figures of 3-8 against Botswana at Kigali in June 2022.