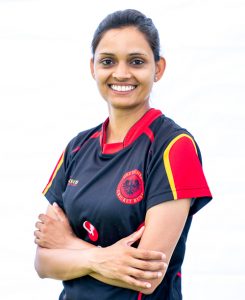 Born on September 10th 1986 is the current captain of the German women’s team, the Golden Eagles, Anuradha “Anu” Doddaballapur.

Originally from India, Anu is a cardiovascular scientist who bats right handed and bowls handy medium pace. That medium pace had some magic to it in August 2020 in the series against Austria she became the first woman to take a double hattrick – four wickets in four balls – in women’s T20I. (Final figures 5-1 from her four overs)

Batting at first drop, Anu has good match awareness and changes the tempo of her batting to suit the needs of the team. That same match awareness is evident in the field as she rings the changes with both bowling and field placements. A very “busy” captain and a good part of the reason Germany won that series 5-0 and backed that up with a 5-0 series win over France in August 2021.

In 2022 Anu led the team to Kigali, Rwanda for the Kwibuka tournament but was unable to play all matches due to injury. Back home and again at the helm, she led the team once more against the touring Namibian team.