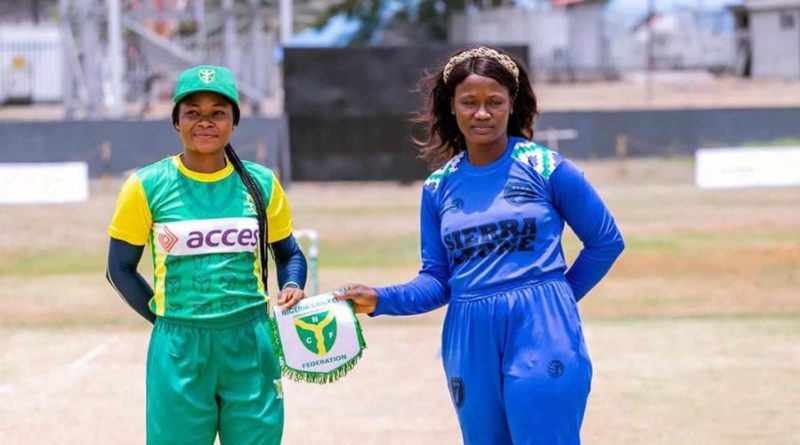 The afternoon fixture saw host nation Nigeria take on Sierra Leone and match of great import for the home team as they played their first international match on the new TBS wicket. There was also a cap presentation to the newest member of the side, fifteen year old fast bowler, Lillian Udeh.

Animata Kamara won the toss for Sierra Leone and sent the Nigerians in to bat. The two teams had met twice previously with Nigeria winning both games. The decision paid dividends immediately, for by the third over, both Lucy Piety (0) and Kehinde Abdulquadri (4) were back in the sheds with the score at just 14.

Omonye Asika (20) and Salome Sunday steadied the ship before Omonye was dismissed when the score was 49. That was the last joy for Sierra Leone for the Nigerians lost no further wickets.

Salome Sunday was joined by the skipper and the two of them hammered the attack. Salome was particularly aggressive and brought up her first half century. She possesses a mean cut shot and a powerful drive, equally adept off both front and back foot. She ended with 61 not out, the highest score by a Nigeria batter, while the captain made a bright 31 not out.

Nigeria finished with an imposing 131/3 from their 20 overs. Janet Kowa (2-37) was the most successful bowler, but like most of them, leaked runs.

Blessing Etim took the new ball for Nigeria and made the first breakthrough in the third over when she clean bowled her opposite number for just 3. Fellow opener Racheal Samson joined in the act and dismissed Mabinty Sankoh for 1 leaving Sierra Leone in trouble at 8/2.

The other Mabinty, King, was joined by Ann-Marie Kamara and the two key batters steadied the ship and then tried to increase the run rate. It did result in a 67 run partnership but the run rate began to get out of hand. The breakthrough came from Lillian Udeh, collecting her first international wicket when she trapped Kamara in front for 28 in the 17th over, making it 75/3.

Zainab Kamara cam and went for a duck and then Blessing took the big wicket of Mabinty King for 30. For good measure she then caused the runout of Fatu Pessima. Sierra Leone finished with 90/6 after their twenty overs, Nigeria winners by 41 runs, giving them the 2 points for the victory.

For her allround efforts, 31*, 2-16 with the ball and a runout, Blessing Etim was named Player of the match.

Player of the Match: Blessing Etim